Respite for the Weary

One of our (their) favorite games is ball retrieving. Sarge, being a Labrador Retriever, fetches the ball back and forth instinctively, hence the name retriever. Juliet, however, the little cairn terrier, has picked up this habit quite amazingly from observing her big brother in action. We play this game outside, and yes, we play this game inside as well. As a matter of fact, whenever these two four-legged friends see me enter the laundry room, which happens to be quite often, they happily realize that it’s play time. One of the two will then do a mad search around the house for the tennis ball; once it’s found, he/she will grab it up, and then bring it to me with eagerness. At this point, both tails are a waggin’. How can I refuse?

An interesting twist…each time I release the ball from my hand, neither I nor the dogs are ever quite sure where the yellow round object is going to land. Let’s just say, I was never picked first, second, third, fourth, etc, when being chosen for any sport that involved a ball of any size. There was one recent day in particular that every time I hurled the ball out of the laundry room, it would start out decisively in one direction (my strength is not the problem), but then it would hit an object, be it a lamp or a stool, or the kitchen cabinet, and then bounce just as determined into a totally different direction. I was amusing myself at this complete inaccuracy–so I guess I was having fun after all.

As I was watching the quick re-direction of the tennis ball coming one time after the other, God began speaking to my heart about bigger things, HIS “things”. Right now I have come to some crossroads in different places in which I need to make a decision to go one way or the other. I find myself asking, “God, is this the right road, the right choice? Am I doing Your will?” After much prayer and time in His word, I have started walking in the way in which I believe He is leading me, trusting Him to make it clear. Now, I can say from past experiences, there have been times that this path stays straight, with very little surprises. HOWEVER, there have been other times that my steps of blind faith have only been the predecessor to get me to a point of complete redirection. And then I’m re-routed into something much more beautiful and adventurous than I could have imagined on my own.

So often in the bible, God says these words to those whose heart’s are completely His: Go your way. (Daniel 12:9, Mark 10:52). And as you do step forward in blind, yet obedient faith, your way transforms into His way.

So throw that ball out there my friend, trusting Him to direct it in whatever way He pleases. Then, just like my dynamic duo, be excited and expectant to see… where the ball bounces.

And Jesus said to him “Go your way, your faith has made you well.” And immediately he regained his sight and began following Him on the road. Mark 10:52 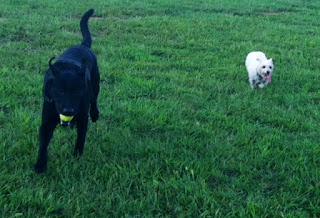 A new prayer will be coming soon!