Respite for the Weary

Here is one more page of my adventure in Ethiopia, labeled Abounding:

One of the most disturbing things to me while I was in Ethiopia was how the street kids in the big city of Addis Ababa would come up and tap on our bus windows and beg for food or money (or anything!). One afternoon, we were surrounded by these children, but we couldn’t hand anything out due to the dusruption it would have caused amongst them. My heart ached as I just sat there and I watched these desperate children at my window. I wrestled with this unsettling question: Why am I on the inside of the bus? And: Why am I not the one out there tapping on the window? I took this thought to bed with me that night, and woke up to it the next morning. In my quiet time, the Lord began to answer my searching heart in His word: …for I have learned , in whatsoever state I am…to be content. I know how to be abased and I know how to abound: everywhere and in all things I am instructed both to be full and to be hungry, both to abound and to suffer need. I can do all things through Christ which strengthens me. (Phil. 4:11-13). So that’s it? It’s okay that they are the ones suffering need, and I’m the one who is full? We are to be content with our lot that is handed us?  Hmmm….I kept reading in Philippians, and was struck by Paul’s words only a few verses later: But I have all, and abound: I am full, having received…the things which were sent from you, an odour of a sweet smell, a sacrifice acceptable, well-pleasing to God. (Phil 4:18).  Ahh, I see…God uses His people to pull the suffering and needy “into the privileged bus”, so that they too, may abound. 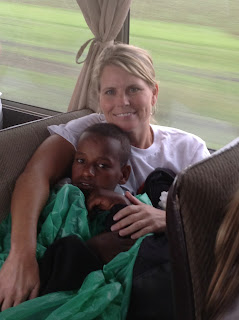 Interestingly, the same day that I read these verses, we were traveling to our next destination out in the countryside. Our bus made a pit stop at a hotel for all those who needed to go to the bathroom (and yes, “a pit” is what we got…just a hole in the ground for us ladies). Outside this hotel, was yet one more young boy who lived on the streets. We asked about him, and invited him to spend the day with us so he could get a meal and receive some TLC. So…Tadaluu got into the bus. The whole afternoon, he watched us quietly and received love gratefully. When it was time for him to go home (?), he said he had nowhere to go. He didn’t want to take our money because he knew he would be beaten by others. His parents were both dead. And he said of his remaining uncle, Why would he come look for me when he has already forgotten me? Our leaders, Kelly and Shane Putty, with the help of Bissy, a Christian Ethiopian who is wise in situations such as this, decided to call Hope 4 the Hopeless (mentioned in my last post). By God’s design, one remaining bed was open at this shelter. I had the privilege of holding Tadaluu in my arms on the bus for two hours as we traveled to the shelter…all the while, I prayed for him: that he would find rest, that he would adjust well, that he would not be afraid, that he would someday be a mighty man of God who would spread the gospel in Ethiopia, and that he would come full circle and rescue kids off the street.
That evening, we dropped him off at his new home; he was warmly received, and was shown to his room which he shared with another young boy who was also saved from street-living. Tadaluu had a bed for the first time in who knows how long. He was safe, secure, abounding in Jesus’ love.

The next day we saw him, and the transformation in just 24 hours  was remarkable. I am so thankful that God used us, His people, to pull Tadaluu into the bus.  It must be our business to do our Father’s business: to reach outside…both spiritually and physically…one individual at a time and bring the needy and suffering into His love.  Through Christ we can be abased, and through Christ, we can abound.

A new prayer will be coming soon!